There are several key indicators we should be paying attention to in the Canadian energy market in the first quarter of 2013.

Looking first to the Natural Gas market, we have seen significant upward pressure on price and higher than expected volatility with a late spring and cooler than expected temperatures. North American natural gas storage fell below the ‘5 Year Average’, causing NYMEX pricing to begin a steady climb from below $3.50MM/Btu back in February, up to over $4.20MM/Btu in late April. That is a 20% increase. Prices have since retracted somewhat and are now holding around the $4.00MM/Btu price point, which is still a 14% increase.

Looking forward on the short-term, Natural Gas is projected to see fairly flat future market pricing, but as we look further out in 2013, into 2014 and 2015, we do see projected trading prices climb steadily.  As lower than normal NatGas prices continue here in Canada, it does present an opportunity for businesses interested in managing their NatGas costs to look at low fixed-rate term options, to remove the inherent risk associated with the volatility of the NatGas market.

Glancing at Canadian crude oil prices, we’re still experiencing a stunted market due to what everyone is calling the ‘Bitumen Bubble’, resulting from Alberta’s current inability to get our product to port for global export. As long as this remains the case, the Canadian petroleum industry will be faced with below global market pricing, negatively impacting our production and energy sector growth.

The Power/Electricity market remains highly volatile as Alberta’s generation capacity remains very tight and we continue as a net importer of power from our provincial neighbors, BC and Sask. April delivered a surprising price spike and a 13 year high, when a combination of planned and unplanned Alberta power plant shutdowns resulted in a power generation shortage. Additional power from our neighbors compensated somewhat, stopping Albertans from experiencing potential brownouts. Planned increases in future generation capacity will come from two coal-fired plants, Sundance I and II (operated by TransAlta), as they undergo needed upgrading and retro-fits before they come back online in the next few years. But, as consumers, we all need to be aware of the projected increases in power transmission rates, and the ongoing reality that due to demand growth and current tight generation capacity, Alberta power rates will very likely remain highly volatile short-term and for many years to come. 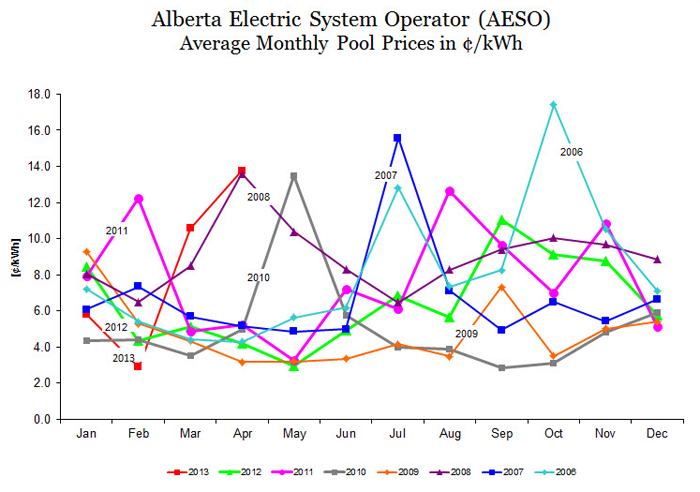 Provincial transmission rates are set to increase due to the needed construction of new grid power lines. This will have an impact on all Albertans, including large, medium and small C&I, as well as residential. According to AESO, large industrial consumers of 60MW or greater could see an increase to $27/MWh by 2018, as opposed to historical rates of $11/MWh back in 2011. Small industrial may be hit with even greater rate increases, with projected rates as high as $50/MWh by 2031. Residential could see rates as high as $60/MWh in the same time-frame. It’s important to point out that ‘transmission’ costs can represent up to 50% of your power bill, and this portion of your bill is fully regulated, which means consumers cannot directly hedge against this cost. With this in mind, for those businesses looking for increased cost certainly, properly managing the ‘power/commodity’ component of your monthly bill, which is fully deregulated in the province of Alberta, will be extremely important for your bottom line and ability to budget more confidently.